Few European Christmas traditions elicit as many diverse and divergent opinions as Black Pete of the Netherlands. Santa's former slave may have been whitewashed in recent years, but many still view him as a racist caricature from the country's colonial past.

Myths about Santa's sinister helpers are as widespread in Europe as Grimm's Fairy Tales. In parts of Germany, Knecht Ruprecht brings terror into the hearts of naughty children when the gift-giving season arrives. In Austria it's Krampus, the horned devil who torments adolescents with asocial tendencies. In France, Pere Foutard does the proverbial whipping. Kids in America are threatened with coal in their stockings if they act up, but in European folklore, they are beaten with switches or stuffed in sacks. Brutal stuff. But in no country is the tale of Santa's diabolical sidekick as bizarre as in the Netherlands, home to Zwarte Piet ("Black Pete").

The story of Black Pete is unique on the continent and it is also one of Europe's oddest and most titilating Christmas traditions -- one that tends to raise the eyebrows of foreign visitors and local immigrants. No small number of people see the yuletide character as a racist emblem of Holland's colonial past.

Before trawling that debate, though, let's take a brief look at the myth that has defined the country's Holiday Season for the better part of a century and a half.

Many say it was Holland's Sinterklaas who inspired America's modern-day Santa. But that's where the similiarities end. Unlike Santa, who lives at the North Pole, Sinterklaas resides in sunny Spain. The Saint Nicolas figure that both are based on was actually a real Greek bishop who hailed from the city of Mira in what is modern-day Turkey. The Dutch version, however, is much more faithful to the original. With his gold crosier, red bishop's dress and red mitre, he's far more ecclesiastical looking than his portly American counterpart. And whereas Santa Claus is famous for circumnavigating the globe with a sleigh and his reindeer, Sinterklaas arrives in the Netherlands each year by, get this, steamship.

Steamship? At the time of the invention of Holland's modern Christmas myth by a Dutch schoolteacher in 1852, explains playright Mark Walraven, who recently wrote and staged a play critical of Black Pete, steamships were simply awe-inspiring. They must have been something akin to the Concorde or Richard Branson's Virgin Galactic spaceships.

Perpetually in tow is Sinterklaas' slave, Black Pete. At least that's what he was called from his 19th century origins up until the 1950s, when a new focus on cultural sensitivity led to a slight watering down of a tradition that was slowly subjected to the rigors of political correctness. In the new tale told to children each year, that pesky black face paint on Zwarte Piet's face comes from soot collected as Santa's helper wriggles down chimneys to deposit branches in the shoes of badly behaving kids or to help deliver presents from Sinterklaas for the good ones. Some whitewashers of this racist little tale also like to say he's a chimney sweep. "It's just an excuse used by people because they don't like to be reminded of the dark nature of Black Pete," says Walraven.

The arrival of Sinterklaas and Zwarte Piet is an event covered live on national television and the festivities are celebrated across the country. For several weeks, dozens of Zwarte Pieten and Sinterklaases can be seen crisscrossing the lowlands country, culminating on Dec. 5 with the exchange of gifts. Throughout the celebrations, you can buy Black Pete cakes, plush toys, balloons, chocolates and any number of knickknacks.

'If You Don't Behave, Black Pete Will Get You'

In the old days, parents would warn their children: "If you don't behave, Black Pete will come and take you with him back to Spain." Today, though, Black Pete -- and there are often a handful of them accompanying Sinterklaas as he makes his way around Dutch towns -- hands out cookies.

The new incarnation of Black Pete may be a chimney sweep and "Sinterklaas' helper," but efforts to make him less offensive haven't been totally successful. The thousands who dress each year as Black Petes still resemble players in a 19th century American minstrel show or a British Golliwogg. And in recent years, that has angered many in the Netherlands' black immigrant community, which stems largely from former colonies like Surinam in South America, the Antilles in the Caribbean or Africa.

Forty-six-year-old playwrite Walraven, whose drama "In the Shadow of the Saint" about the debate over Black Pete recently played at Amsterdam's Krater Theater, says he used to be one of the many white men in Holland who would paint their faces black each year to the delight of children. "I stopped after I began working with black people," he says. "Many people are offended by this symbol. In songs written before World War II, he was often called Sinterklaas's slave, and the texts of many songs and lyrics about him, especially from the 19th century, make it very clear that he was a racist symbol. In the end, Black Pete always comes across as a little stupid, clumsy and one who talks strangely and doesn't speak proper Dutch."

But in a country where Sinterklaas and Black Pete is a favorite tradition, talk like that can quickly spark a wildfire of anger. Though an increasing number of groups are speaking out against Black Pete, most Dutch don't see anything racist in the character and instead fear that critics are waging an all-out war on Christmas itself. An anti-Black Pete protest planned in the city of Eindhoven in September was cancelled after its organizers received death threats.

"The majority here in Holland refuse to talk about Black Pete," says playwright Walraven. "They are afraid that the people who discuss it want to take away Sinterklaas as a phenomenon."

One of messages of his play, which received a warm reception in the immigrant-filled neighborhood where it premiered, is that you can still have Sinterklaas without Black Pete. "Many countries have abolished these kinds of things, but in Holland they still exist," Walraven explains. "Nevertheless, most Dutch don't consider themselves to be racist and feel they are being personally attacked when you criticize Black Pete."

What would Walraven do with Black Pete? "I'd just get rid of him," he says. "You must admit that his origin is racist and that many people feel offended and hurt by it. It would be better to find another solution."

In the Dutch-speaking Belgian region of Flanders, at least one city has already altered its tradition, switching roles to make Sinterklaas a black man and Pete his white helper.

Felix De Rooy, the director who helped stage Walraven's plan in Amsterdam, has another idea. He recently suggested to the Dutch daily NRC Handelsblad that Black Pete could be replaced by far less decisive figures of almost equal popularity in Holland and Belgium: The Smurfs.
http://www.spiegel.de/international/europe/holland-s-politically-incorrect-christmas-santa-s-little-slave-helper-a-594674.html 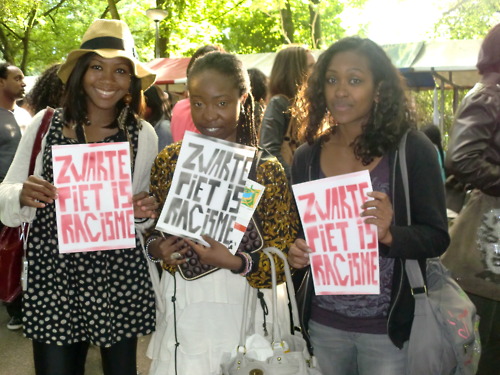 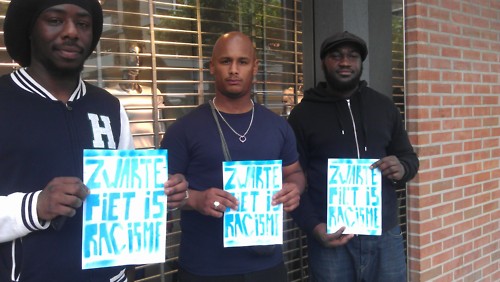 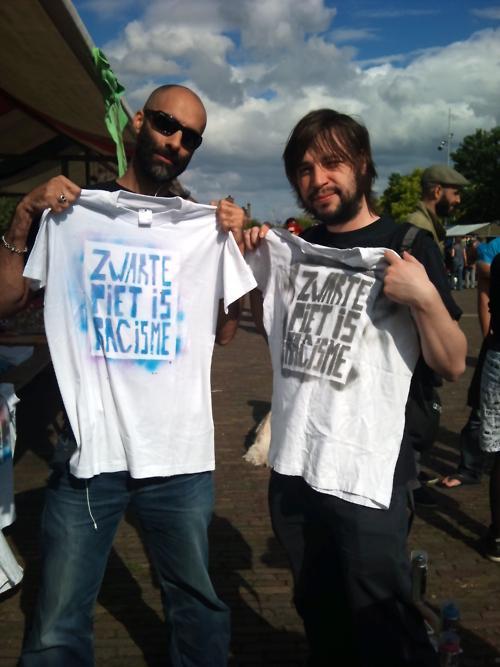