This unexpected result raises several unanswered questions and is expected to provoke much debate. 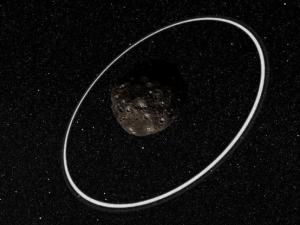 The European Southern Observatory announced this week the discovery of rings around an asteroid 1.4 billion miles from Earth. Chariklo is the largest of the class of asteroids orbiting the sun between Saturn and Uranus known as Centaurs. Results were published online today in the journal Nature.

Rings are not an unusual feature in the solar system. Each of the outer planets: Jupiter, Uranus, Neptune and of course Saturn have rings. However Chariklo is the smallest ringed body found to date.

"We weren't looking for a ring and didn't think small bodies like Chariklo had them at all, so the discovery – and the amazing amount of detail we saw in the system – came as a complete surprise!" says Felipe Braga-Ribas (Observatório Nacional/MCTI) author of the paper.

Researchers observed Chariklo during a June 2013 occultation visible only from South America. As the asteroid passed in front of star UCAC4 248-108672, the star's brightness dimmed as expected. However it also dimmed seconds before and after. Comparisons of observations made from seven telescopes allowed researchers to construct a detailed view of the asteroid as well as the shape, width and orientation of the rings.

The rings, provisionally named Oiapoque and Chuí for rivers in Brazil, may be debris created by a past collision.

"So, as well as the rings, it's likely that Chariklo has at least one small moon still waiting to be discovered," added Ribas.
http://webcache.googleusercontent.com/search?q=cache%3Ahttp%3A%2F%2Fwww.wral.com%2Fdiscovery-an-asteroid-with-rings%2F13510966%2F

"This unexpected result raises several unanswered questions and is expected to provoke much debate."