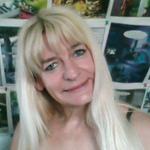 The illusion is dependent on the angle at which you judge the axis of rotation to be, which is ambiguous because of the lack of light cues. The comments above are incorrect; you can actually see that the dancer's foot is always moving in a clockwise arc projected onto the plane, even when she appears to be rotating anticlockwise. It's a rather clever illusion, but I'm skeptical that it has anything to do with left vs right brain dominance, it probably has more to do with the angle of your head when you first see the animation. (If you can't see it both ways, try closing your eyes, rotating your head and then opening them again.) The list of "left brain functions" and "right brain functions" are pop pseudoscience and not even self-consistent.