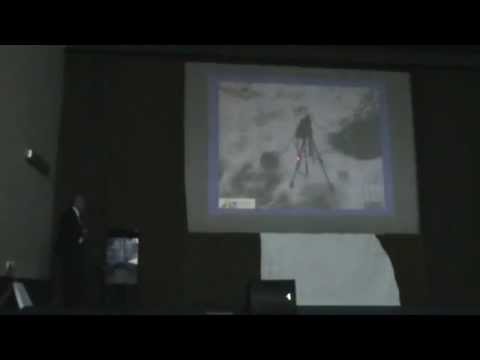 
We found a very strong emissions of low frequencies and infrasounds around the top of the hill. The range in total silence and with an absence of wind was between 10 Hz and 70 Hz with a large peak around 48 Hz. The volume was not elevated. This mechanic vibration is the most likely reason why so many sensitive people have the sensation of energy when they arrive on top of the pyramid. They fell the vibrations! Below a particular volume we perceive low sounds better by vibration through sensors in human bones than by ear. This volume cannot create damage to human health, but we cannot be sure what happens over a long period of exposure.

The low frequencies and infrasounds found on the Pyramid of the Sun explain very clearly the sensation of mysticism which some people perceive in this place and how its very easy for those practising meditation can apply this technique at this site.

We can suppose that these frequencies are probably comming from a nearby earth fault and are concentrated by the pyramid shape. In fact there are no similar frequencies in the surrounding hills. There is an ongoing debate that the Old Town on the top had or was also a monastery, but all historians agree it was the location where many important historic documents of medieval Bosnia were written and signed. So it was a place where wisdom, culture and attention was common, helped by this good natural enviroment.

We used professional studio microphones with a wide dynamic range and a flat response at different frequencies (Sennheiser MKH 8020, response Frequency 10Hz - 70.000Hz) along with shielded cables (Mogami Gold Edition XLR) and gold-plated connectors. For recording we used a digital portable recorder with a maximum sampling rate of 192KHz (Tascam DR-680 of TEAC Group), but we controlled the result with other digital recorders (Tascam DR-100 and Marantz PMD661) with less technical characteristics.

I attached some files of photographs and graphics for you and you can find a sound file here: http://www.sbresearchgroup.eu/Immagini/SunPyramid_081_st12.mp3

In it you can find low frequencies, but it is ONLY to listen and ONLY if you have a high fidelity stereo headphones with a wide range of low frequencies, otherwise you can not feel anything. The file is not altered, but only compressed in mp3 format because the original WAV file is over 300 Mega bytes. It lasts for around 2 minutes and you have to listen to in total silence. At the end there is a plane passing over us, so you can compare its low frequencies with low frequencies from pyramid.