31.08.2018 um 07:58
You have to excuse me, that I do not speak german. Osland the writer of Operation Isotopsy, son of Chief Investigator Harald Osland told: "Every forthnight a new group of german marines came to learn submarine survival at Haakonsvern base at Bergen. Their leading officer was there for all groups coming. The investigators were not allowed to go to Flensburg to interview him. Was told " lack of money" Osland's continued in german: "Er var von 1963 "bis " 1970 oberleutnant for deutche ubothlehrengruppe In Bergen". I ask myself this questions: 1. Why did this german Lieutenant Colonel stop working in Bergen December 1970. 2. Why was the investigators not allowed to go to Flensburg to interview him? I do not believe it was because of lack of money. 3. If this german man had contact with her and knowed her; Why did he not reported her missed after december 1970? 4. The most important question: is it possible to find the name of this oberleutnant that stayed there for evey new group arriving Haakonsvern, Bergen, Norwegen? Can anybody in here find his name. - I myself am not sure he was oberleutnant, he could have another title and perhaps he was there for lehregruppen in tauchen/diving...Can anybody help me to find his name? Do they have such registers in Germany? - Mannfred aus Norwegen

MannfNorwegen schrieb:You have to excuse me, that I do not speak german 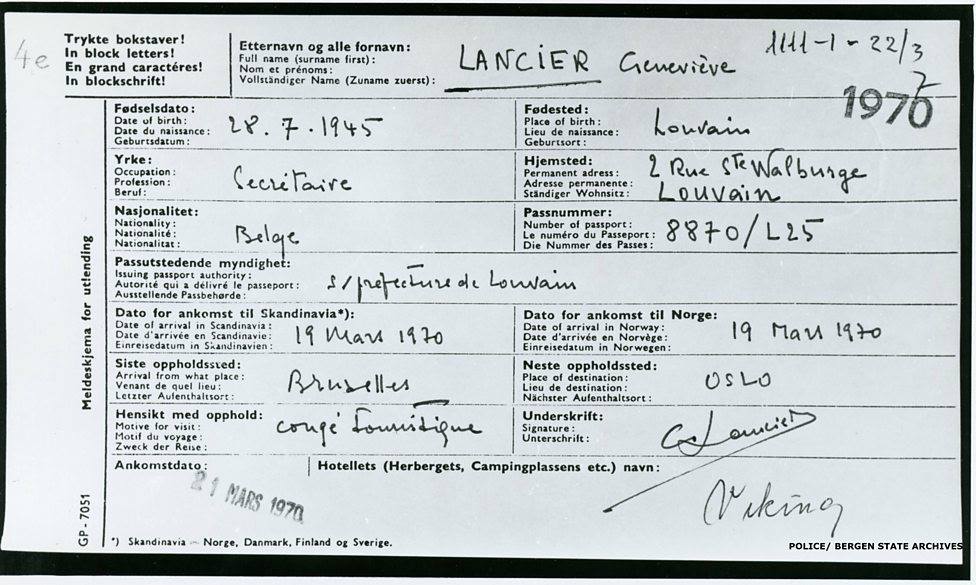 I found this insane story but I like some of the things he write. This man have 13 teories about who Isdal Woman was. I belive some of it's more like a fairytale than real. He tells aboat a car, and other things. I do not know if he have some special information or only just wery good fantasy. This is the some of the thing i like:

https://www.facebook.com/groups/deathinicevalley/ to get a feel for the potential crime or suicide committed. Some references can only be gleaned from the Facebook group. Some ideas were not covered by the podcast — but were from external sources or wikipedia, which I intend to fully edit …one day.
On the afternoon of 29 November 1970, a man and his two daughters were hiking in the foothills of the north face of Mount Ulriken, in an area known as the Isdalen Valley. They found the charred body of a woman, hidden among some rocks, in an area popularly known as Death Valley. Also found (by the autopsy) was a large quantity of sleeping pills brand name Fenemal; a 1/4 bottle of kloster liqueur from Vinmonopolet — mostly empty ; two partially charred plastic water-carrying bottles; an almost fully burned plastic cup thought to be from a thermos flask; remnants of rubber boots; a shawl; a woollen jumper; an umbrella; a watch with two clip earrings and a ring.
Beneath the body was a container and fur hat remnants which they later found contained a small trace of petrol. The autopsy determined she died from taking an overdose of sleeping pills and carbon monoxide poisoning — with the burning from the fire only as a contributory factor. Many of the sleeping pills in her stomach were undigested. A few days later the police found two suitcases in a train station which contained a wide variety of items. But the most alarming thing was many of the labels on cosmetic products in her suitcases were scratched off and the clothing labels removed.
If you are curious I built a list of them here and the items found around the body (it will always be a work in progress): https://docs.google.com/document/d/1HavB8NzWyRaFp79NIdmC0_ARxOE1ZvQ_CcSgkQHpJaU/edit?usp=sharing
This 48 year old mystery has prompted many books, blog items, newspaper articles and theories with ideas that she was a spy. Most contain significant errors. Few have focused on simply trying to determine her real origins from the DNA evidence. Though with new isotope tests of her teeth this work is beginning to happen.

I came across some strange ‘catholic’ coincidences for Isdal woman from the names and places used on her hotel registration cards (those in bold font):

And don’t forget the alcohol a kloster liquer from Vinmonopolet found at the scene of the crime. These were originally made by monks in cloisters — hence the name. Then there’s the picture of the Madonna and baby in her suitcase and another religious postcard from the UK.

All these saintly catholic references can only mean one thing — the person who completed all those hotel registration cards using different names was a catholic.